Gemstones have been imbued with spiritual meaning for eons, dating back to the breastplate of Aaron that contained 12 gemstones representing the signs of the zodiac and the tribes of Israel.
The modern birthstone list was established by the National Association of Jewellers in 1912, with a few updates over the years.Most people find special meaning in their birthstone, and a ring, necklace or bracelet set with their stone is a great way to honour the most important people in your life and keep thoughts of them top of mind.

JANUARY: GARNET
Garnets were prized by the ancient Egyptians, and during the Middle Ages were exchanged to signify trust and affection. High-quality garnets have vivid colour and good translucency. Commonly found in a deep red, this crimson stone’s name comes from the word granatum, Latin for pomegranate seed.

FEBRUARY: AMETHYST
The vibrantly purple amethyst, a variety of quartz, has long been worn by royalty and was a favourite of both St. Valentine and Leonardo da Vinci. Amethysts were once considered as rare as diamonds, and medieval soldiers believed they provided healing and calmness. High-quality specimens have saturated colour and pure purple hues.

MARCH: AQUAMARINE
These light blue gemstones are a variety of the mineral beryl, as is the emerald. Long associated with water, the aquamarine was especially treasured as a talisman by ancient seafaring people. Aquamarine’s cool blue hue is believed to have a calming effect on its wearer. Look for clear, bright colours and good translucency.

APRIL: DIAMOND
April is the winner of the birthstone lottery—diamonds! Treasured for their rarity and brilliance, diamonds have been prized for centuries as the symbol of eternal love. Highly valued for their brilliance and durability, diamonds also signify strength, balance, and courage.

MAY: EMERALD
The rich, green emerald has been held in high esteem by many cultures around the world for centuries, including the ancient Incas and Aztecs who regarded them as holy.

JUNE: PEARL
The lustrous pearl is the oldest known gem and symbolises purity and innocence. A rare gift from the sea, only about one in 20 pearl-growing mollusks will produce gem-quality pearls and no two are alike. Coveted by fashion icons and royalty, pearls have become an heirloom for generations of women around the world. 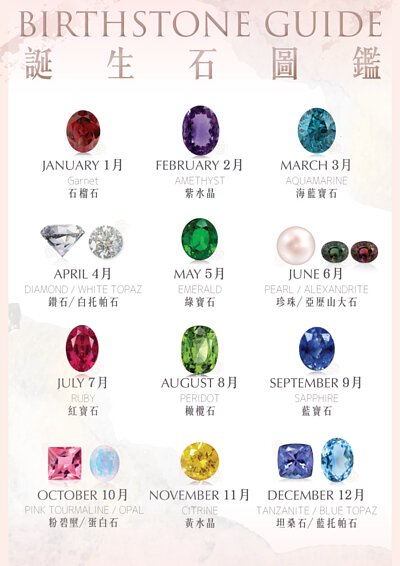 JULY: RUBY
Because of its fiery crimson colour, ruby has long represented romance, devotion, and passion. Rubies are a variety of corundum, a mineral with great hardness well suited to everyday wear.

AUGUST: PERIDOT
This vivid green gemstone is thought to ward off evil, and bring good fortune to its wearer. Peridots, like diamonds are formed deep in the earth, surfacing only during volcanic eruptions. Hawaiian mythology refers to this vibrant green gemstone as the tears of the fire goddess, Pele.

SEPTEMBER: SAPPHIRE
Sapphire is well known for its velvety-blue hue, but pink sapphire is gaining popularity. A variety of corundum, sapphire’s natural hardness makes it an ideal gemstone for fine jewellery. A traditional symbol of nobility, truth, and romance, the most prized sapphires have good transparency and vibrant depth of colour.

OCTOBER: OPAL／TOURMALINE
The dramatic opal stands out for the fiery range of colours contained within a single stone, and is typically cut into rounded cabochons to enhance its exceptional light play. The Greeks believed opals provided the power of prophecy and the stone is a celebrated symbol of loyalty, faith and hope. Tourmaline is the newer October birthstone. Very few gems match tourmaline’s dazzling array of colors. Perhaps this is why ancient mystics believed this October birthstone could inspire artistic expression – it has a color palette for every mood.

NOVEMBER: CITRINE／TOPAZ
This bright, effervescent gemstone gets its name from the French word for lemon and has been regarded as a symbol for happiness, health and vitality for centuries. High quality citrine will have good transparency and no eye-visible inclusions. Symbolic of wisdom and longevity, blue topaz ranges in hues from deep London blue to paler sky blue. The ancient Greeks believed that topaz gave strength to the wearer.

DECEMBER: TANZANITE／TURQUOISE
Tanzanite may be a relative newcomer to the world of coloured stones. The tanzanite birthstone is often described as “velvety,” mostly because of its deep and saturated colour, which ranges from a pure rich blue to violet, with the blue considered most valuable.The turquoise birthstone was thought to possess many beneficial powers, like guaranteeing health and good fortune. From the 13th century on, it was believed to protect the wearer from falling (especially off horses), and would break into several pieces at the approach of disaster. Hindu mystics maintained that seeing a turquoise after beholding the new moon ensured fantastic wealth.